I was bombing down a trail, descending the last couple miles into Will Rogers State Park in Southern California last week when I rounded a bend and was (somewhat) surprised to see a full on film crew conducting an interview on the side of the trail.  I was running fast, around 6 minute pace and noticed that a couple of the people were standing right in the middle of the singletrack, including the guy holding a 15-foot boom mic.  Annoyed, I kept my pace up and intended on flying right by.

Then, some guy who was looked like he was in charge, started frantically waving at me to get by them.  He had both arms extended and was in a half crouch, silently (but madly) flailing his arms in the direction I was already running, and running pretty fast.

Since I was already doing what he seemed to be signaling me to do, I could only assume that I had misinterpreted his signals.  So naturally, I slammed on the brakes, stopped right in front of the guy (and this huge production) and started asking him– very loudly– what his arm motions meant.

“Just keep running!” He said in a hushed shout, eyes wide with bewilderment.

“But, I was already running fast, so your signal had to have meant something else, right?” I screamed at the top of my lungs.  “You wouldn’t have been so adamantly suggesting that I simply continue what I’m doing, right?  I would have done that on my own.”

One of the three guys behind the massive camera setup said “Cut!”.

I looked around a bit and said, “Oh no. I didn’t notice the multiple handcarts full of boxes, the complete lighting studio and the 20 people standing around on the side of the trail.”

These guys were incredibly upset I had ruined their shot.   It was pretty hilarious.

“Maybe next time you see someone running down the trail, simply trying to enjoy themselves, don’t start telling them what to do– especially if they are already doing what you want– it’s confusing.  Maybe just realize where you are and let me do my thing.”  I added before starting to jog back down the trail.

You may assume that things like this only happen on trails in the Santa Monica Mountains, but as has been pointed out ad nauseam since the deluge of gopro/drone/iphone/gimble/boom hordes descended on Squaw Valley a couple weekends ago, this shit has gotten out of hand.

At this point, the old rules for trail etiquette are obsolete.  They leave out scenarios that are becoming all too common in the trail and mountain running world and they need to be updated.

Forget the uphill/downhill argument.  If you’re taking selfies with your gopro on the big climb, the guy running downhill with free hands has the right of way.  If you’re holding a gopro on the end of a selfie stick and you’re approaching a guy simply holding his phone in his hand, you relinquish your right of way.  If you’re holding a DLSR attached to a gimble with a microphone, you gotta move to the side for the guy with selfie stick.  It only makes sense.

How many times have you been out for a trail run and thought that the person you were passing was saying hello, so you said hello as well.  Then you find out that they were just talking into their phone and they are fucking furious with you for ruining their live facebook feed or snapchat.  I know, it happens to me almost everyday.

If you hear someone talking on the trail, it is safe to assume they are only speaking to their device, not you.  Keep your head down and keep moving.

There’s nothing worse than coming around a corner and seeing someone standing directly in the middle of the trail, staring up in the air with a controller in their hands.  They never see you coming.  They are too concerned about crashing their plastic quadcopter with their $500 camera on it.

Eric Schranz recently advocated for shooting them out of the sky.  I love this line of thinking, but I don’t have a gun.  In the particularly egregious offenses, I like to take control of the drone– either forcibly or by telling them that I am an experienced drone operator and can show them some awesome “tricks” and then turn the drone in a kamikaze missile headed straight for them.  This way, not only do you destroy the drone, you get the opportunity to inflict some bodily harm. 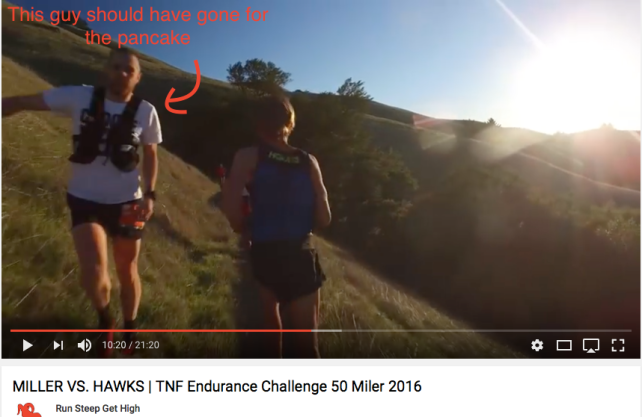 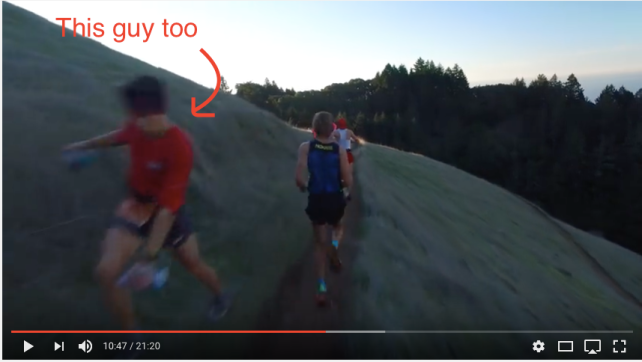 It seems that every race has some stipulation of this rule and yet, every time I race I end up behind someone who can’t hear me yelling at them.  It’s way worse when it isn’t a race situation and people have to use common sense to determine what and what not to do.

If you yell “excuse me” as loud as you can three times and get no response, you are allowed (obligated?) to trip the person in order to get around them.

Basically, you become fair game.  It’s like those Purge movies except limited to this very specific scenario instead of one night a year.