[Editor’s Note: We apologize for the lack of content for the past year.  Expect a return to regularly scheduled programming at the beginning of February.  We have some great stuff coming down the pipe.  Until then, here’s a piece that isn’t what we typically publish on this site, but we hope you enjoy it anyway.] 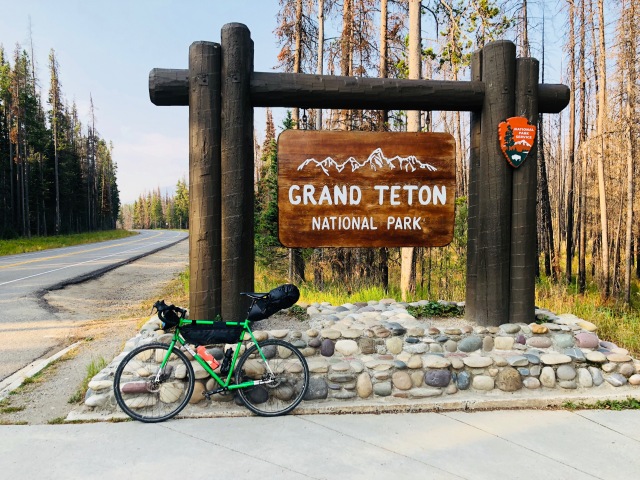 My bike and I had been through a lot together.  Sure, I had only had her for about eight months but we were tight.  We went together like avocado and expensive toast. Rice and beans. Coffee and alpine starts.  She was good to me, and I was good to her. Every time I rode her, regardless of the conditions, we just clicked.  I smiled a lot. She fit me like those old pair of 511s.  The ones I don’t want to get rid of even though I should. They feel too good. They fit right.

I hung that first century on her.  On dirt and gravel no less. Around the Tetons.  At altitude. On my first bikepacking trip. No flat tires, no slipped chain.  Not even a squeak. Smooth, supple and perfect. That’s how I would describe her to my friends.  And fun. Oh so very fun. Since I got her, I hardly went a day without riding her. My more expensive bike never saw the light of day. There was never an excuse not to ride her.  No reason was good enough. It didn’t exist. I couldn’t talk myself into getting on anything else. I was in love and having fun.

I am a simple man.  A minimalist if you will.  I will inevitably error on the side of less.  20 mile run in the heat? A single 20oz handheld and no calories should be perfectly sufficient.  Running up Half Dome in July from the valley floor? I’ll just toss a Lifestraw around my neck and hope for the best.  Maybe tuck an avocado in my back pocket. Definitely never need a shirt. For any reason. Read a little beta online and free solo Grand Teton in an afternoon.  Pass 50 people on their second day of a three day trip wearing helmets, harnesses and hundreds of feet of rope. I like to keep shit simple.

Point being, I’m the type of guy who buys a single speed gravel bike.  I’m extremely minimal in my athletic pursuits and like to try hard. The perfect combo, I like to think.  Be the guy in the puffy jacket and the overstuffed backpack while I jog by you shirtless in my zero drop shoes.  What do you have in there? I’m in awe of your overpacking and overdressing. It’s confounding. I do more than you and I do it with less. A lot less. I take pride in this type of stuff.

I took great pride when I rode my single speed past the dudes wearing full kits on $10,000, 21-speed bikes.  Some would even balk at my solo gear and try to keep up for a second. Until the realized what it took. They aren’t willing to go there. Shift again.  Pop, pop, pop. Still nothing.

She made me feel safe, protected.  We had a relationship built on mutual trust and understanding.  She knew I was gonna take care of her. Ride her everyday. Push the downhills a little too fast and find the rhythm on the climbs, flowing. Smoothing it out. 12% feels like four and a half. And I knew that she had my back. My bike. She got me there. She could push a mellow 20mph on the flats and still climb with geared-up, kitted-out lawyers with too much money to spend on their bikes.  It just worked. I was Thor and she was my hammer.

She rode on the bike rack all summer.  Came with me wherever I went. Bryce, Sedona, The Wasatch, Jackson, Grand Teton and Yellowstone NP. Yosemite. The High Sierra Music Festival for god’s sake. I didn’t leave home without her. She was my escape.  My trusty steed. Made everything better. My ace in the hole. My get out of jail free card. Can I live?

Then, just as quickly as she entered and changed my life, she was taken from me.  In an instant. Stolen from a busy Santa Monica park. In broad daylight. With dozens of people in the immediate vicinity. First bike rack from the door.  In plain view of, and six feet from, the completely full parking lot. My baby was taken from me. I walked outside and glanced toward where my bike was supposed to be and my heart stopped. It couldn’t be true. There must be some mistake. Not my girl.

It’s pretty easy to assign blame here.  It was Phil Gaimon’s fault. He made me believe that otto-lock was actually a good company that could be trusted when they said their lock couldn’t be cut easily (I have since discovered that it can be sniped with a pair of garden shears easier than unlocking it).  I would never have even known about otto-lock if it wasn’t for Phil Gaimon. I hope he dies. I hope he dies an unbearably slow and incredibly embarrassing death.

But this article isn’t about that asshole or assigning blame to anybody. No. And this article isn’t even about me, despite an abundance of evidence to the contrary. This article is about my All-City Nature Boy Single Speed Cyclocross bike.  The love of my life.  She was taken from me on a balmy afternoon in November.  A mere eight months after she swept me off my feet, she was gone.  Never to be heard from again. No sightings on Craigslist or OfferUp.  No cameo at the local bike thieves’ tent encampments. Just gone. Vapor.  Blowin’ in the wind.

I’ve accept this fact. Resigned myself to it. As Boyz II Men so aptly put it: It’s the end of the road. But my one and only hope is that she found a good home.  I hope the dickheads who stole my bike kept it together and sold it to someone who shreds it.  Someone who can push it harder than me for longer than me. Someone who rips gravel roads up and down mountain passes every morning before breakfast and rides it into the next state on weekends.

For the love of god, please don’t let her be sitting in a garage somewhere or all chopped up.  Let her be rolling downhill at 40 mph over rocks and ruts. Let her be bathed in moonlight as she navigates some Southern Utah slickrock along the edge of a mesa.  Or in Hawaii, bombing down the side of a volcano staying mere seconds ahead of an ever-quickening cascade of molten lava. Whatever the case may be, let her be free.  Let her be alive. She needs to live. She needs to ride ridges and bask in the fresh air.

Even though there’s no way to be sure, I can lie to myself and pretend that it’s true.  It has to be true. It’s what she deserves and where she belongs. Never rest, my love. Ride, ride, ride.  I’m grateful to have ridden you while I had the chance. It must have been love… but it’s over now. 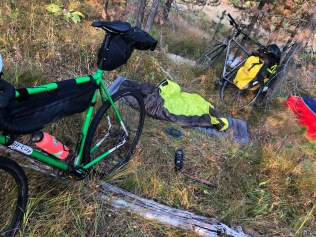