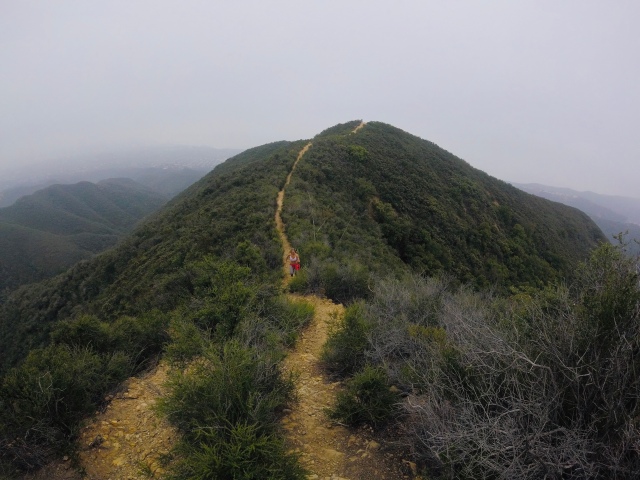 Dre coughed so violently that it activated her gag reflex, sending in her into a sort of mid-stride dry heave.  She looked up the steep ridgeline in front of her and forced the words out through a muffled wheeze:  “We almost there?”

It was cold for Southern California, around 45 degrees, but she was stripped down to her sports bra, the previously donned jacket, beanie and gloves stuffed in various locations around her waistband, stripped off and stowed as the effort accumulated.  We were charging up a trail in the Santa Monica Mountains that you won’t find on any map or listed in any guidebook.  One of those locals-only type things that, if you’re lucky enough to know about it, will roll you higher and higher across increasingly technical terrain until it deposits you on the highest point in The Pacific Palisades.  The summit has exposure, solid topographical prominence and even a make-shift register in a plastic box with a little boulder on top.

We kept pushing hard, fighting through the brush and branches jutting out across the seldom-used trail.  Just as we crested one of the many false summits along the ridge and started to descend I heard a muffled exclamation but didn’t see her break stride so I kept moving, not thinking much of it.  It wasn’t until we were back in the car that I saw the gash along her right eyelid and found out that she had been stabbed in the eye by an errant tree branch.

It’s a funny thing that these type of efforts do to you.  Dre was chasing the course record on a Strava segment. You might think that’s pretty lame.  Say whatever you will about it: it’s a social media app, it’s not a real FKT, it’s for old dudes on electric bikes and retired pro cyclists.  But this app and it’s segments, particularly this 1.4 mile ridgeline with 1600ft of vertical gain over rocky, technical terrain with a solid class 4 section, switched what could have been a casual Friday morning jaunt through the mountains into a coughing, hacking, dry heaving, spitting, air-gasping all-out sufferfest where Dre was prepared to leave it all out there on the trail.  Blood, sweat, tears, stomach bile; name your bodily fluid.  She was going after it.

There’s something special about these type of efforts.  There’s something different about charging and moving and hurting yourself.  Taking yourself to this place where you’re not sure what’s going to happen.  A place far outside your comfort zone.  A place where pretense and posturing fall by the wayside, dumped in a pile along with all those other neatly manicured aspects of your personality.

It’s a magical place that, in my opinion, not a lot of people have the ability nor the toughness to experience.  I’m not talking about going out and trying to run a fast mile or targeting the course record on the ½ mile bike path loop by your house.  I’m talking about mountains.  Climbing.  Testing yourself against terrain that most people wouldn’t consider walking on.  Putting yourself in situations where the stakes are high and the risk is real.  I’m talking about being alive.

The amount of time we spend in a climate controlled box, staring at a glowing rectangle has overreached any cliche about being sedentary and far surpassed all hyperbole about “screen time”. For most of us at this point, it’s just the way it is. It’s becoming harder and harder to remember a time when things were different.

We have come so far out of our evolutionary setting that the effects are real and easily measurable.  We hardly experience any of the emotions that make us human anymore.  We don’t do anything that makes us appreciate all the luxuries that we enjoy.  The inordinate amount of time we spend in this luxury makes us soft and whiny so when we don’t have it, we pout and get angry and count the seconds until were back in it, to the point where I hear people talking about not being able to take a shit without their cellphone. How did we get here?

“We’re not gonna get it…” Dre said breathlessly as her left foot slid atop a small pile of loose boulders.

“Just keep moving,” I replied. “Almost there.” I had probably said that so much to her at this point that it reminded me of the opening line of 4th Time Around by Bob Dylan: “Then, she don’t waste, your words they’re just lies.” But she did. She kept charging. Grunting and huffing and puffing away. Approaching the class four section (aptly titled The Wall on Strava). I extended a helping hand but she ignored it. I knew she would. She scrambled to the top, wheezing a bit, fighting off another coughing fit.

All that was left was a couple of little rollers and we were there. I glanced down at my watch as Dre charged past me, hands still on her knees, surveying the terrain waiting for it to flatten out enough for her to start running. It was going to be close. She didn’t ask me how much further, she could smell it. The barn, the summit and the end of this little digital line, drawing a beautiful aesthetic across the ridge by way of satellite.

She was lost in the effort.  Lost in the experience. Completely in the moment, just her against the mountain.  Moving lightly over natural terrain, pushing her body to the edge, redlining and testing those outer edges of her fitness.  Striving to reach the top.  I don’t think it gets much more human than that.  She was learning about herself this morning.

Would she have done it without Strava?  Probably.  That’s just the kind of person she is.  But maybe not quite as hard.  Having a bench mark already set by someone goes a long way toward making your morning runs competitive.  Not for everyone, but for some.

For Dre on this particular morning, the thought of going to work all day after missing the course record by eight seconds was too painful an eventuality.  This time, you could safely say that Strava made her do it.

I was a few steps behind her as she crested peak and stood on the summit, rolling green mountains surrounding her on all sides.  Despite giving all I had on the final 400 meters, I couldn’t stay with her. I found her bent over, breathing hard, watching her sweat hit the dirt in front of her face. I laid my hand gently on her back.

“You got it,” I said with the slightest air of solemnity, “By almost two minutes! Sent a lot of emails this morning…”

She stood up, beaming. Her eyes sparkled and her skin glowed.

“I fucking better have,” she said as a huge smile spread across her face, “cuz there’s no way I’m doing that again.” 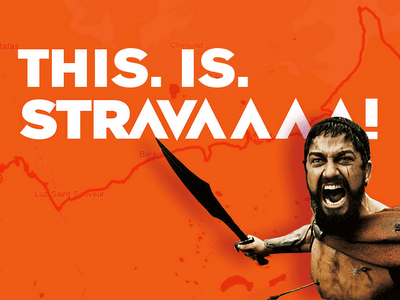 We all love Strava.  Or hate it.  Or spend hours obsessing over it while simultaneously pretending that we don’t care at all.  As has been pointed out exhaustively—it’s a pretty polarizing piece of the social media puzzle.

I personally spend anywhere between five minutes and two hours a day on the site, a time usually determined by how impressive I deem my current activity levels.  If I went on a run that boasts impressive stats, I’ll repeatedly open the page throughout the day at work just to look at the run—check my splits again, memorize my segment goals or simply just stare at mileage totals.

If I haven’t been doing anything impressive—or anything at all—I am far less likely to open the app throughout the day.  I’m just going to see that Dylan Bowman ran 22 miles in a little over 40 minutes and summited Mt. Tam for the #108 time that week.  Or that Anton Krupicka rode his bike 150 miles to the base of Longs Peak before skipping up the keyhole route and tagging the summit.  Just a bunch of depressing shit mainly.  But you can’t say that it isn’t motivating.

Strava at it’s best is a statistical catalog that allows you to track and share your endurance activities while giving you a transparent look at the training programs of your friends and some of your favorite athletes.

Like all social media, however, it can be horribly misused.  Just like you have friends who suck at Facebook or Instagram whose name you dread seeing pop-up in your feed, we all have those people on Strava that we feel obligated to follow even though they suck at using it and perpetually flood your feed with garbage.

If you’re already one of those people who suck at Strava, just keep doing what you’re doing.  If you are using it properly, please stop immediately and follow these six steps:

1. Break your run into as many parts as you possibly can.    You would never want to have a single activity as your run on Strava.  Then you’re just lumping your warm-up, cool-down and actual run into one thing.  This is going to bring your average pace way down.  Not cool.

If you can, try to break every run into 4 separate activities: pre-warm up, warm-up, run, cool-down, and post-cool down cool down.  That way, we can all see your “real” pace during your workout but you can also flood all of your follower’s feeds with multiple activities. And— perhaps most importantly— you are effectively quadrupling your Kudo potential.  Just think about all of those extra Kudos. They are going to make you feel sooo good.

2.  Put EVERYTHING you do on Strava. Did you walk to the mailbox?  Strava that shit.  Did you walk around Whole Foods for 15 minutes?  Strava the hell out of that shit.  That’s mileage you gotta keep track of.  When you’re looking back at your training log trying to figure out why you performed so well last year, the answer might be in all those walks down to the corner store for beers.  You never know.

3. Log your indoor resistance training workouts (with details).  I love it when I’m looking through my feed and I see “Lats and Core Work Today” or “4 x 10 reps of Bicep Curls”.  This is really why I started using Strava. Oh, the motivation!  I think I’m going to drop to floor right now and do 25 pushups so I can log it.  I should probably take a photo too…

4. Sign up for every possible challenge that you can, every month, over and over again.  Sign up for the 10k challenge every month, even though you run a 10k every other day.  And definitely sign up for the open-ended challenges that track your mileage monthly, that way it pops up into feeds each time you run 25 or 50k.  That’s better.  I love when I can’t even see a single activity in my feed because all I can see are someone’s list of 14 current challenges. It’s awesome.

5. Create a bunch of segments-within-segments so you can find the perfect section where your time cracks the top ten. I know Strava says they don’t want you doing this but simply ignore all those warnings about your segments being to similar to existing segments.  And definitely do NOT make it private. We all need to see these results and how amazing you are.

6.  If you go running on the treadmill, please take a picture of the treadmill screen after you’re finished.  Otherwise, you could totally be lying.  Plus, when Strava updated their app to give photographs a much bigger role in the interface, this is exactly what they had in mind: treadmill photos.  Just like treadmill runners are their target demographic for Strava Premium Memberships.